A large number of Subarus and a few other vehicles were parked in the field off East Court Street as their owners removed Chinese Privet, Ailanthus, Multiflora Rose, English Ivy, and various other non-native plant life.  By the way, if you think privet is a bush, it can easily be a 25 foot tree.  We tried to retain the native plants like Coral Bush, of which there were unfortunately few.  We also collected barbed wire and fencing that remained along the sight barrier.   Dave did most of the heavy cutting with an electric chainsaw, while BRFALers removed the less than tree-size invaders with loppers.  Chemical treatment will have to wait for later, but for now, the Chinese Privet is under “cultural” control.

Some day, if our work proves effective, Eastern Red Cedars and Black Cherries will inhabit the entire stretch of land along the street and the invaders will be vanquished.

It turned out that 5+ hours was enough for us (especially those who worked the entire time) and also for the chainsaw batteries.  A few of the 50 foot Ailanthus trees were left for next time.

If you missed this opportunity, more will likely be coming your way in the Spring as we work with DCR to make the 150 acres of Bald Knob NAP a more natural setting for wildlife (yes, this means deer too) and the unusual mafic barrens denizen, the Fame Flower.

Posted by Jill @spottedonthetrail at 1:15 PM No comments: 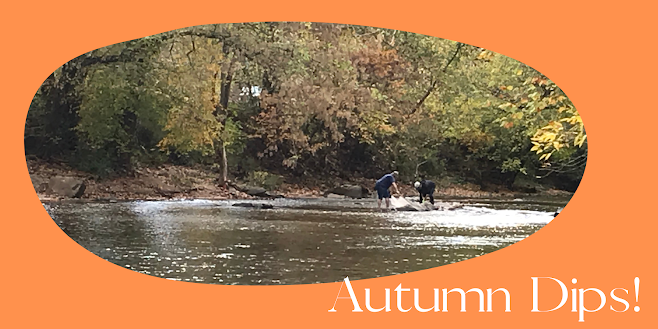 It's time for Autumn Dips!  In partnership with Save Our Streams our chapter volunteers wade into local waterways to test the water quality.  Twice yearly, members work in small teams to test 17 stream locations around Franklin and Bedford counties. These streams are mostly Smith Mountain Lake tributaries.

Why does water testing matter?  Volunteers calculate the number of living things, macroinvertebrates, in the local stream and calculate a health score, based on what they find. This information informs the Virginia Department of Environmental Quality on which streams need further monitoring and attention. This project makes a real difference!

Chapter Member Geoff Orth leads the project and welcomes volunteers to join the effort. Email brfal.vmn@gmail.com to express your interest.

For more information on Virginia Save Our Streams, visit vasos.org

Posted by Jill @spottedonthetrail at 6:58 AM No comments:

Please shoot us an email: brfal.VMN@gmail.com to find out more! Posted by Jill @spottedonthetrail at 7:47 AM No comments: 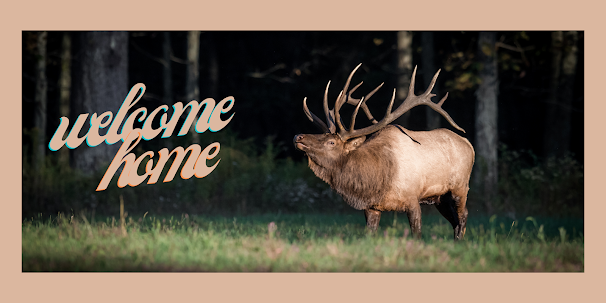 Elk are being reintroduced into Virginia!  Yes I said “re-introduced”!  Did you know that elk are native to Virginia?  There is an ongoing effort to rebuild the elk population by the Virginia Department of Wildlife Resources on old strip mine reclamation property in Buchanan County.  You can visit and tour any one of 3 elk viewing stations.

Elk was historically found throughout eastern North America, including Virginia. However, by the late 1800s, unsustainable hunting and habitat alteration resulted in the extinction of the eastern elk. The last survivor of Virginia’s original elk herd was killed in 1855 in Clarke County.

If you want to learn more about the program and tour the viewing area or even watch a live cam, please go to any one of the following links on the DWR website:

If you’re interested in free evening elk tours they will be offered weekly starting September 8th and continuing into October.

Posted by Jill @spottedonthetrail at 2:52 PM No comments:

About The Virginia Master Naturalist Program

The Virginia Master Naturalist Program is a statewide corps of volunteers providing education, outreach, and service dedicated to the beneficial management of natural resources and natural areas within their communities. Interested Virginias become Master Naturalists through training and volunteer service.

People who are curious about nature, enjoy the outdoors, and want to be a part of natural resource management and conservation in Virginia are perfect candidates to become Virginia Master Naturalists. It is open to all adults regardless of race, color, national origin, sex, religion, age, disability, political beliefs, sexual orientation, or marital or family status.

The process for becoming a certified Virginia Master Naturalist typically takes 6 to 12 months. One starts by completing a 40 hour basic training course offered by a local chapter of the program. An additional 8 hours of advanced training are also required. An important part of the certification process is the required 40 hours of volunteer service. More information click here

CLICK HERE to see the amounts in your area. Many BRFAL Members host official rain stations.